It’s a fortnight since Hayley2020, and I’ve almost recovered… Almost… which means it’s time for a quick reflect (if a quick reflect is possible, given the nature of reflection).

The conference covered a lot of ground. We started on November 12th – the bicentenary of Hayley’s death – with what, in pre-Covid days, was planned as our public lecture. Alex Kidson – the world expert on George Romney, explored Romney’s friendship with William Hayley, through a selection of the artworks that arose from, or were impacted by, their relationship. 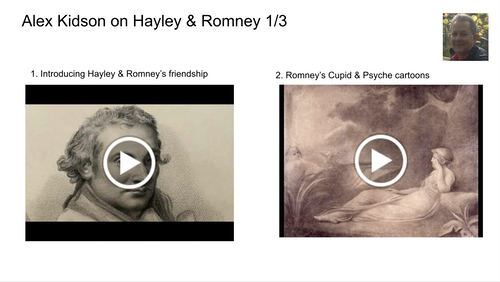 image of one of our on-demand video presentation slides

After questions and a quick break, we segued into a series of presentations on Hayley in his context. Alexandra Harris spoke on Hayley’s grounds at Eartham House, situating his landscaping works in the artistic and social contexts of his time. Susan Matthews discussed Hayley’s writing for and about women, focusing on The Triumphs of Temper and A philosophical, historical, and moral essay on old maids. By a friend to the sisterhood. and Amina Wright on the relationship between Hayley and Joseph Wright of Derby. Then – after another break – George Doji and I demo-ed progress on the pilot of A Museum of Relationships (aka AMoR), the digital edition of Hayley’s correspondence we’ve been working on at the Fitzwilliam Museum over the past year or so (longer than originally intended because of the pandemic). 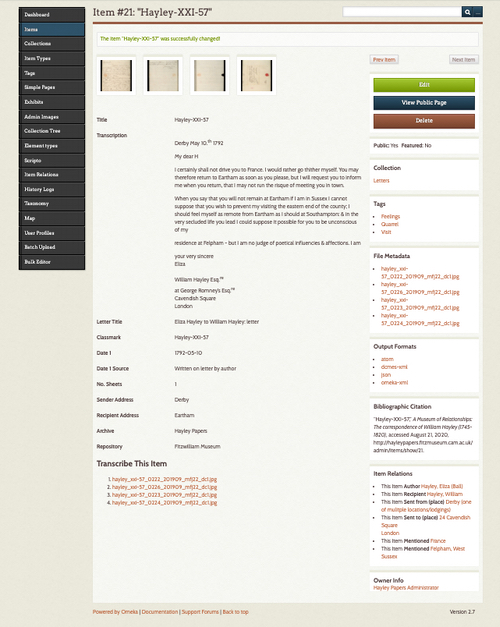 It was great fun finally to have the opportunity to show off the work we’ve done to digitise, transcribe, annotate and link selected letters from the Fitzwilliam’s archive – and brilliant to have so many people at the conference asking us to tell them when the website’s live and offering to help us test it. And a couple of representatives from other musuems/art galleries expressed interest in using the technical framework/platform George and Dan are building from Philo van Kemenade’s designs! 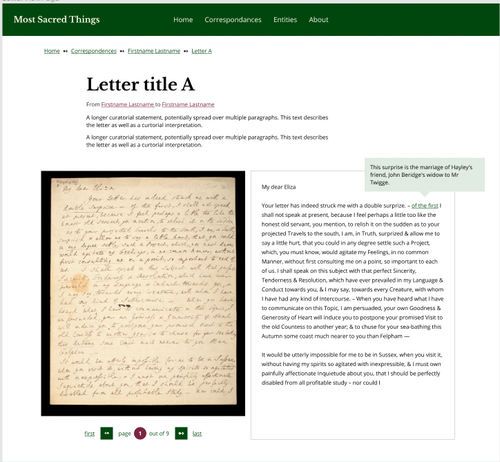 Other than the wrap-up session, that was it for day one. Day two, opened with a virtual picnic where we discussed the 3 Ps: the term patron, pets (our own and Hayley’s) and politics (contemporary rather than historical). And, of course, the weather. Then we had the privilege of David Bindman’s take on Flaxman’s relationship with Hayley, looking at their collaborations and what each brought to the table – and how Flaxman managed Hayley’s interference: with a judicious mix of firmness, explanation and flattery. This was followed by a lively sesion on Hayley and Blake, in which Mark Crosby gave us a tour of Hayley’s libraries, Sarah Haggarty discussed a newly-discovered manuscript, and Jason Whittaker outlined how Blake’s biographers have, over the centuries, characterised Hayley, and the relationship between the two men.

We were bowled over by the level of interest. Ninety people registered and each session attracted between 35-50 attendees. Many of those who couldn’t make all the sessions watched the presentations “on demand” in Google Slides.

“Thank you for organizing this fantastic event and for the friendly atmosphere, I really enjoyed it. The format of the sessions worked very well, and I especially appreciated the presence of subtitles, which allowed us to better follow the recorded papers. Excellent work!”

We were delighted (and – to be honest – a bit surprised) by how well the format worked, and by the enthusiasm with which it was received.

“Well done for this! I learnt a lot. … it was heartening to see academic thoughts being expressed articulately, and hear about research from experts again. It made the world feel reassuringly normal.”

Filming the presentations in advance meant

“Thank you and your team for all your hard work. Yesterday was my first shot at a Zoom meeting and you made it so easy 😁”

Watching the videos and being able to discuss them with the presenters – most of whom participated throughout Hayley2020 – was fantastic, and a massive privilege.

Although we covered a broad range of topics, in two half day sessions, we could, of course, only scratch the surface of all the aspects of Hayley’s life, work and networks. In particular, we missed a focus on Hayley’s work with, and support for, women writers, which we would have included had not two presenters needed to withdraw for Covid-related reasons. However, that did emerge in discussion, as did the following themes, amongst others:

“I really enjoyed #Hayley2020 .I even caught up on the video presentations I’d missed. Such a pleasure to watch enthusiastic academics sharing learning and ideas in a spirit of collaboration”

There were of course, loads more questions raised including whether Hayley had pets (answer: yes). How did Blake know how to ride Bruno? Who was the Brotherton who taught Hayley drawing at Cambridge? What do we know about Hayley’s friend Mrs Poole? What were Hayley’s relationships like with the Chichester ecclesiastical community in Chichester (answer: complex – much gossip…)

Anyway, I had a fantastic time, and am already pondering Hayley2022: sensibility & empathy.

Thanks again to everyone who contributed to making Hayley2020 – the first EVER conference dedicated to the life, work and contexts of William Hayley (1745-1820) – so memorable, even in such difficult times!

“Many thanks indeed for a fascinating conference. I particularly liked the films (as opposed to watching reams of Powerpoints one after the other!) and enjoyed the discussions very much too. It was great to be able to learn about Hayley and the context of his times from such a good range of experts … Thanks for a really stimulating event – a highlight in a rather dreary, upsetting time.”

PS: this is my new favourite thing 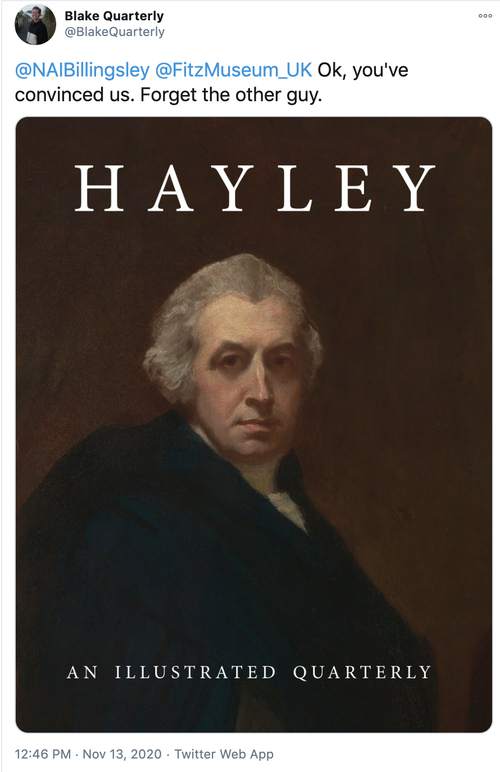