On Tuesday, June 20th 1797, the writer and scholar William Hayley received this letter from his dearest friend, the poet William Cowper. It was unsigned.

Ignorant of every thing but my own instant & impending Misery, I know neither what I do, when I write, nor can do otherwise than write, because I am bidden to do so. Perfect Despair, the most perfect, that ever possessed any Mind, has had Possession of mine, you know how long, and knowing that, will not need to be Told, who writes.

“I believe,” wrote Hayley, “it is hardly possible for Language to describe all the various Emotions, that this dark billet of my desponding Friend produced in my Heart.” He decided to see if – even from a distance – he could effect a cure.

He thought for a few days before sending his carefully considered response.

“My keen sensations in perusing these heartpiercing Lines have been a painful Prelude to the following Ecstatic Vision — I beheld the Throne of God, whose Splendor, tho in Excess, did not strike me blind, but left me power to discern, on the steps of it, two kneeling angelic Forms.

A kind Seraph seemed to whisper to me, that these heavenly Petitioners were your lovely Mother, & my own; both enjoyed fervent Supplications for your Restoration to mental Serenity, & Comfort.— I sprang eagerly forward to enquire your Destiny of your Mother.—Turning towards me, with a look of Seraphic Benignity, she smiled upon me, & said: “Warmest of earthly Friends! Moderate the anxiety of thy Zeal, lest it distract they declining Faculties! & know, as a Reward for thy Kindness, that my Son shall be restored to Himself, & to Friendship.

But the all-Merciful & almighty ordains, that his Restoration shall be gradual; & that his Peace with Heaven shall be preceded by the following extraordinary Circumstances of signal Honour on Earth.— He shall receive Letters from Members of Parliament, from Judges, & from Bishops, to thank Him for the service that He has rendered to the Christian World by his devotional Poetry. These shall be followed by a Letter from the Prime Minister to the same effect; & this by Thanks expressed to Him on the same account, in the Hand of the King Himself.— Tell Him, when these Events take place, he may confide in his celestial Emancipation from despair, granted to the Prayer of his Mother; & He may rest satisfied with this assurance from Her, that his Peace is perfectly made with Heaven.—Hasten to impart these blessed Tidings to your fav’rite Friend! said the Maternal Spirit; & let your Thanksgiving to God be an Increase of reciprocal Kindness to each other!—“

“if any of these Incidents speedily take place, which your angelic Mother announced to me in this Vision, as certain signs of your Recovery, I conjure you in her Name, my dear Cowper, to communicate them to me, with all the kind dispatch, that is due to the tender anxiety of sympathetic affection!— Heaven grant that I may hear from you again very soon!— adieu!”

He then tried to kickstart his project by persuading politicians and church men to write to Cowper. He was careful, however, to keep his overall plot a secret: one he shared only with Cowper’s relations and carers, the Reverend John Johnson and Lady Harriot Hesketh. And, after much nagging by Hayley and the judicious application of Lady Hesketh’s schmoozing skills, William Cowper began receiving letters of the type Hayley had promised.

The first came from the politician, philanthropist and anti-slave trade campaigner, William Wilberforce. Johnson reported to Cowper’s response to. “The outside,” Cowper said, “tells me, I shall be taken away by Force, & the inside will tell me the Time when”.

“It was written in Derision”

The second – a result of Lady Hesketh’s intervention – was sent by the Bishop of London. It detailed the religious enjoyment with which the Bishop read and re-read Cowper’s poems. “Never,” said Cowper, “was such a Letter written, never was such a Letter read to a Man so overwhelmed with Despair, as I am — It was written in Derision – I know, & I am sure of it.”

The third and final letter was written by Hayley’s friend Richard Watson, the Bishop of Llandaff. It arrived in October 1797, as Cowper was reading a book of the Bishop’s sermons. He did not react to this letter in the same way, but just looked at it in silence. This left Johnson trying to link it with the previous two and Hayley’s original with as much subtlety as he could muster (which, it turned out, was not very much at all).

And that was it for letters. Hayley’s focus switched to other concerns: his first wife Eliza (from whom he had separated early in 1789) died in November, and Hayley had to sort out her effects. Then, early in 1798, Hayley’s adored son Tom, who was apprenticed to the sculptor John Flaxman, was sent home to Sussex, ill. Over the next two years his condition deteriorated slowly and painfully: he died on May 2nd 1800; exactly one week after Cowper.

“The experiment for the restoration of his [Cowper’s] Mind,” wrote Hayley “did not certainly succeed to the extent of my Wishes, & my Expectations.” However, around this time, after months of inactivity, Cowper resumed work on his long-neglected translations of the Iliad and the Odyssey. Hayley felt that there was “great reason to believe, that the unexpected Letters, which He actually received, made a beneficial Impression on his Spirits; & gave a wonderful activity to his Mind, even while it seemed to be involved in impenetrable Gloom.” And, that “the Revival & Improvement of his Homer, while his Spirits appeared for unfit for such a Task, may be regarded as one of the most marvellous Facts, that can be discovered in the History of the human Mind.”

Cowper continued to work and when, on 31 January 1800, Hayley received a letter from Johnny Johnson, enclosing a short, newly translated passage from the Iliad, in Cowper’s handwriting, he was thrilled. Towards the end of Two Memorials of Hayley’s Endeavours to Serve his Friend Cowper (unpublished, MS in the British Library) “it appeared to me as a blessed omen of his being entirely Himself again - The Emotions of my Heart upon that Idea immediately gave rise to the following…”

Blest be the Characters so kindly trac’d
In that dear Hand which I have long’d to view
Pledge of Affection old and Kindness new
From the reviving Bard supremely grac’d
With all the Gifts of Fancy, and of Taste,
That can Endear the Mind! and given to Few,
The rarer, richer Gift, a Heart as true,
As e’er the Arms of Amity embraced!
Ecstatic Tears I on the Paper shed
That speaks, my Cowper, of thy mental Health,
And of thy Friendship, soothing as the Dove!
So weeps the Nymph, who, when long Storms are fled
Welcomes from the Sea her Bosom’s rescued Wealth
To Life, to Joy, to Glory and to Love.” 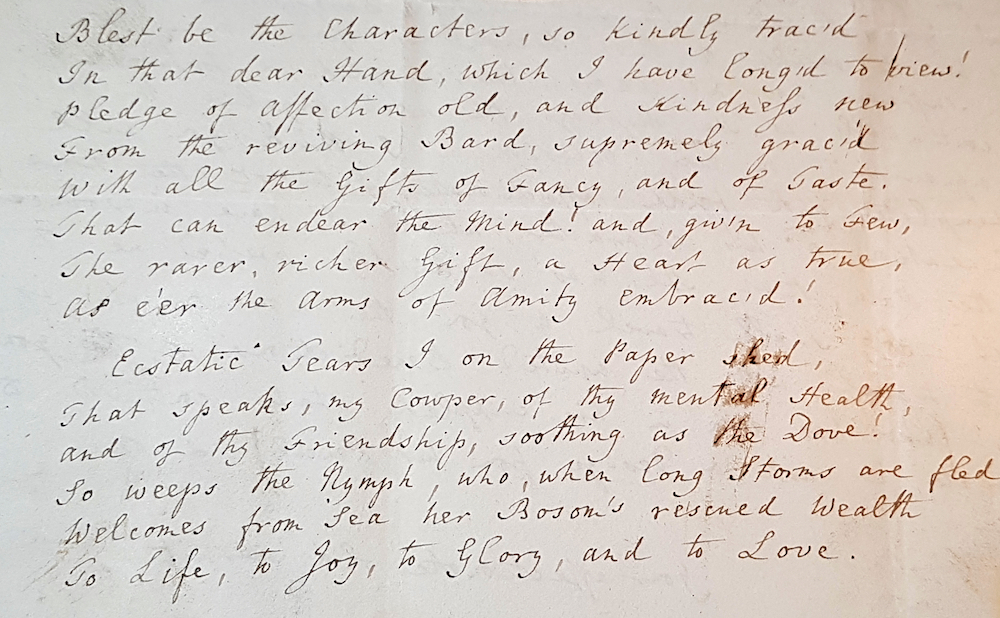 It’s hardly great poetry. But, like a magic mirror, the last three lines seem to reflect a happy ending onto the final stanza of the last original poem Cowper wrote: “The Cast-away” (March 1799), which was first published in Hayley’s biography of his friend:

No voice divine the storm allay’d,
No light propitious shone;
When, snatch’d from all effectual aid,
We perish’d, each alone:
But I beneath a rougher sea,
And whelm’d in deeper gulphs than he.

What’s uncanny about this is that it’s almost certain that Hayley didn’t see “The Cast-Away” until January 1801.

A fortnight after Hayley received the letter that so fed his optimism, Cowper fell ill. A couple of months later, he was dead.